This week the Oscars were a welcome interruption to our still somewhat curtailed lives. The vicarious joy and reminder of the pleasure of a surround-sound, immersive cinema experience while scrutinising the red-carpet outfits has been keenly felt as we tentatively edge out of lockdown.

So once the important business of deciding the best dress was done – Zendaya’s yellow Valentino gown, no competition – thoughts turned to the winning movies.

Something stood out to me this year that should resonate with anyone interested in storytelling – brand communications may not be on a Hollywood blockbuster scale, but the lessons are universal. Indeed, two of the Oscar winning movies stayed with me, not just for their stories but for the way the stories were told.

Let me explain, while trying not to give away any spoilers. Throughout Nomadland – an astonishingly mesmeric and beautiful movie which dared to star an older woman, living an unconventional life – I watched with a constant grip of dread, fearing the moment something unpleasant would befall Frances McDormand’s character (beyond the situation she found herself in, in the first place). With each new encounter I was anticipating an attack, a theft or some other unpleasantness to befall her.

By the end, when this sad, sympathetic story had unfolded, and I realised this was not a tale involving jeopardy at every turn but of grief, loss and loneliness I wondered why I had been so conditioned to expect peril. Perhaps because this has been the go-to scenario in most movies I’ve watched, where the risk in a woman’s life is so often the central feature of her story. It was telling that in Chloe Zhao’s acceptance speech she talked of the kindness she had encountered all her life – one of the film’s core themes.

The other winning movie in my thoughts, Promising Young Woman, is a deliberately provocative, thought-provoking story of revenge which twists and turns and leaves you desperate to discuss the plot and unpick what you’ve just seen. But in a film that encompasses sex, rape and murder it tells the story – with all the associated anxiety, horror and intimacy you would expect to keep you engrossed – but we never actually see a sex scene, a rape, or the usual lingering shot on a dead woman’s face.

I think these two examples of refreshing ways of telling stories – both in the content and the style of the narrative – comes about because they didn’t follow the often-established pattern seen with a male-focused gaze.

Emerald Fennell and Chloe Zhao have told stories in unorthodox, entertaining and thought-provoking ways – these movies feel genuinely different and interesting. Long overdue, these movies have brought to the forefront how greater diversity expands all our horizons – and that fresh voices and interpretations create more stimulating stories. From Hollywood to Soho, varied outlooks and life experiences lead to more interesting content that makes us all richer. 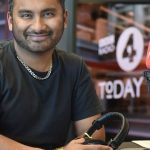 For Imposter Syndrome Sufferers Everywhere: Amol Rajan We Salute You.